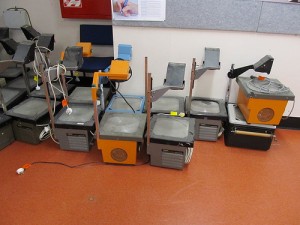 I always thought transparencies were the coolest things. Imagine printing something on a clear film and then being able to project the image on the wall for everyone to see. The overhead projector, with its light bulbs, mirrors and lenses was once considered the height of technology. Transparencies were used in classrooms as a way of sharing images or problems with an entire classroom full of students. Even major airlines, such as Boeing and Beechcraft, used transparencies to review designs with their engineers. But transparencies are joining a large group of obsolete printing technologies that are being replaced by more modern technologies. END_OF_DOCUMENT_TOKEN_TO_BE_REPLACED

Have you ever received a telegram? I was just thinking about it this week, and realized that I have never even seen a telegram delivered to someone I know. It is funny how every generation has technologies that they grow up with, and as each new batch of technology arrives the last generation becomes obsolete. It happens faster now in this age of technology, but if we think about the number of obsolete printing technologies there are we can see how this trend is nothing new. 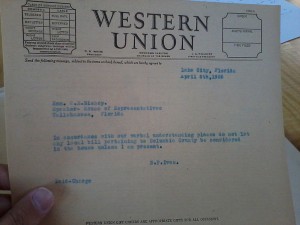 The History of the Telegram

The earliest version of the telegraph telegram was a non-electric device that was invented in 1794. This version only worked as a ‘line-of-sight’ device. The telegram as we know it today was developed by Samuel Morse in 1835. Morse developed the system of dots and dashes that we recognize as Morse Code. He used an electro-magnet to emboss the symbols on long strips of paper. The first message traveled from Washington DC to Baltimore. It was only 40 miles, but such a big deal. Mind boggling when you think of the messages you can send on your smart phone, isn’t it? The invention of the telephone in 1877 was considered a rival technology.
END_OF_DOCUMENT_TOKEN_TO_BE_REPLACED